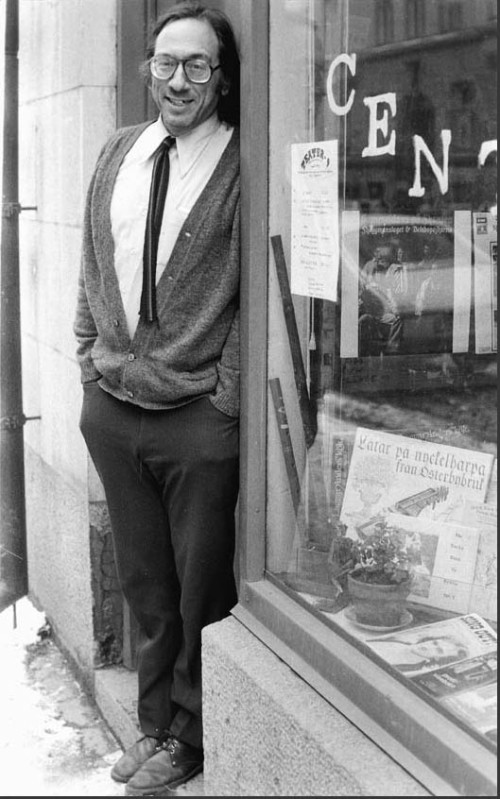 Israel Goodman Young or Izzy Young (born 26 mars 1928 is a noted figure in the world Folk Music, both in America and Sweden. He is the former owner of the Folklore Center in Greewich Village, New York, and since 1973, he has owned and operated the Folklore Centrum store in Stockholm.

In 1957, on MacDougal Street in Greenwich Village, he opened the Folklore Center, a store for books and records and everything related to folk music. It became a focal point for the American folk music scene of the time, a place where one could find such limited circulation publications as Caravan and Gardyloo. From 1959 to 1969, Young wrote a column entitled ”Fret and Frails” for the folk music journal Sing Out. He served on the ”editorial advisory board” for the magazine until his departure for Sweden a few years later.

Young arranged concerts with folk musicians and songwriters, who often made contacts with other musicians at the Folklore Center. Bob Dylan relates in his memoirs, Chronicles, how he spent time at the Center, where Young allowed him to sit in the backroom of the store, listening to folk music records and reading books. Dylan wrote a song about the store and Young, ”Talking Folklore Center”.

After developing an interest in Swedish folk music at a festival, Young closed his New York store, and in 1973, he moved to Stockholm where he opened the Folklore Centrum. Originally at Roslagsgatan in the Vasastan, it has been located on Wollmar Yxkullsgatan at Södermalm since 1986.